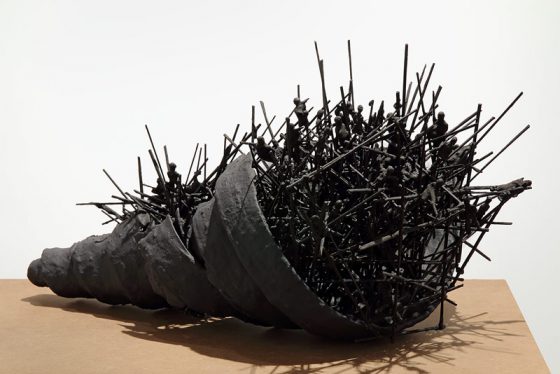 Walid Siti was born in 1954, in the city of Duhok, in Iraqi-Kurdistan. After graduating in 1976 from the Institute of Fine arts in Baghdad, Siti left Iraq to continue his arts education in Ljubljana, Slovenia before seeking political asylum in 1984 in the United Kingdom where he lives and works. Formerly trained in printmaking, Siti works extensively in a variety of mediums including, installation, 3D works, work on paper and painting. 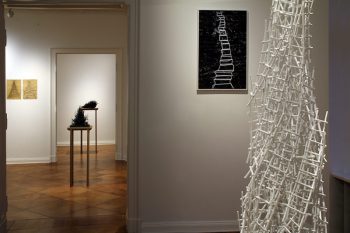 Walid Siti’s oeuvre draws heavily on his lived experience of exile and loss, yet at first glance that is not apparent from his abstract landscapes and geometric and architectural structures. His work is characterised by a subtle, almost understated, poetics and politics of form. It is the sub-text of repression and conflict – tempered with the human capacity for resilience in the face of adversity – that continues to drive his practice. The Black Tower is a sombre statement in sobering times. Nevertheless, Siti still offers us a ladder, a staircase, a thing of beauty and of the imagination, for a way out that looks increasingly slim. 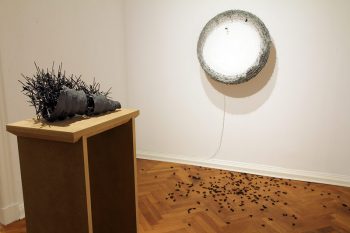 The tension between ruin and hope directs the tone of The Black Tower. At play here are two oppositional forces. On the one hand darkness, confinement and destruction, which come to the fore in Walid Siti’s wounded sculptural objects, such as for example the sculptural piece The Black Tower (2016) after which this exhibition is named. These objects, smothered in heavy black paint combine architectural and other kinds of wreckage with the iconography of war and repression: toy plastic soldiers, barbed wire, and scorched earth. Together they highlight the machinery of armed conflict and the expendability of human life. On the other hand, there is always Siti’s longing for betterment, which is manifested in the returning visual trope of ladders, mountains, ziggurats and staircases. 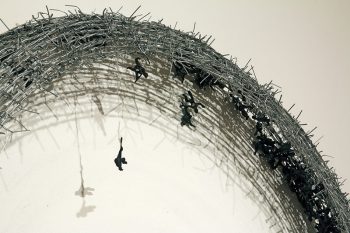 Installations such as Joined Ladder (2016), a white floor-to-ceiling open-ended ladder consisting of smaller ladders, and Passage (2016), a pigment print showing a close-up of a photograph the artist had taken of a cliff in Kurdistan emphasise movement, escape and possibility.Walid Siti’s art is ultimately one of construction, no matter how uncertain the times. These sketches shed light on his artistic thinking process and unpack the grammar of Siti’s visual language. 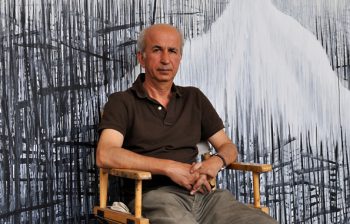