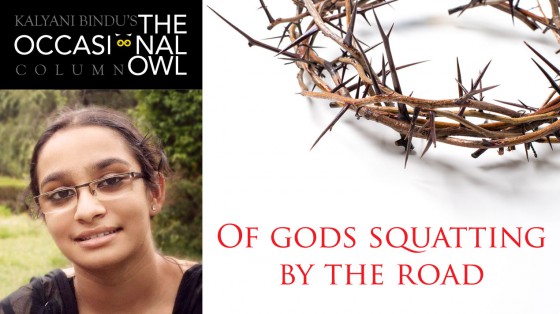 Bare female hands tell stories, in India- of the stinging itch of plastic bangles, of gold bracelets shoving patches of skin into their golden creases like the tankers that fed on Vietnam, or of copper rings that colour the beds of helpless fingers. But, sacred threads around bare hands are different. They are self-repeating storytellers. 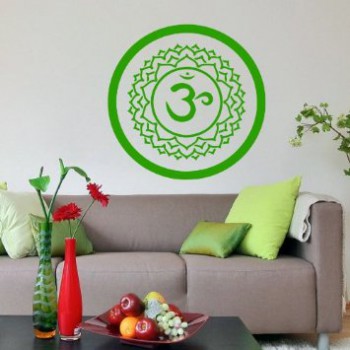 That day, fresh white temple threads, thick, coarse and tied in rude lumpy knots, had appeared on my moderately pious friend’s hand. Her family was apparently busy visiting gods in their grand shelter homes, demigods in their slightly grand camps run by families of fat rats, and every other nomad astrologer crisscrossing their legs by the roadside picking lice, aligning their matted hair buns, spiralling in and out like telescopes in observatories, with the trickling corridor of daily prophecies in the sky. The family priest had discovered an ill-positioned planet leaking money out of the family’s severely cupped hands. A year is to pass before the planet casts away the vengeful red flush on its sun dial face. The unhappy mother, father, brother, sister, grandpa, grandma, uncle, aunt, cousins collective has to wait in the purgatory of crawling queues, with the tropical sun beating down their wet, remorseful faces, limbs groaning at odd angles, and stomachs lining up queer, empty nooks. They have to fix uncomfortable afternoon appointments with impatient astrologers, receive digital capsule forecasts from cyber paraphernalia. They have to nod away to ancient advices given out as modern tips typewritten by the ancient god, who has become, in our age, ‘the mastermind’.
Penance in the worldly world for a fault in the heavenly planets.
Religion is a worldly spectacle. It is hand embroidered into the fabric of the Indian world. It is an inescapable motif.
The spotless grey tarry cosmic world of Mumbai is punctuated by multicoloured garbage waves falling alongside railway lines, living as if off the tip of some rubbish forest that outgrew the green forests, pedestrian pigeons feeding on incessant rains of grains, peanuts and groundnuts, taking off like grey forests of air, lunging menacingly at camera wielding tourists and long ochre beaches with plastic ghosts simmering in the yellow light of night lamps, solitary dogs with their four legs cupped upwards in reverence to the sun-godly lamps. Temples, mosques and occasional churches appear amidst labyrinths of streets, or along the road, at the back of clever vendors selling holy scents and sights. 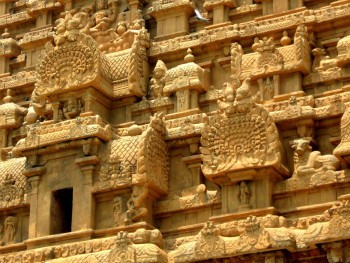 The Mahalakshmi temple with black-white speckled pigeons pecking at its gritty veranda twitching their bird heads at the morning sun as if to comprehend the day’s bird news looked like a strapping aristocrat standing tall before his band of loyal soldiers. This temple by the roadside, I realised, was a facade to a whole street of temple matters at the back of its head. The pallid morning glare of the facade faded as I walked along its tarred sides into the old temple street. It looked like a modern game of cards built on ruins- some crude balance between the old and the new. Signboards indicated ancient ruins of dark brown temples- boards over old gods. Shopkeepers sold flowers, coconuts and agarbhattis crisply. They were merchants of the god who lived farther away in the dead end of the street, under a formidable roof-part intercalating stainless steel tubes, and part wood. Chappals were to be entrusted to the laddoo sellers at the entrance.
One passes through a security portal on ascending the white stairs. As the black drape of the portal is moved, one enters a space that looks very much like a railway station, only smaller, complete with small shops, steel tubes running the length unto the innermost chambers of the temple, group of chanting devotees, their saffron bags strewn over the granite floor and impatient children looking ahead at the inner chamber as if god was to come as a train. Surveillance cameras adorned watchful nooks and policemen disciplined devotees shouting into their mobile phones as they approached the inner chamber. The holy chamber into which people rushed in restless queues glistened in an unnatural manmade golden light- the Devi looked as taken aback by the colour gory surrounding her as I was. 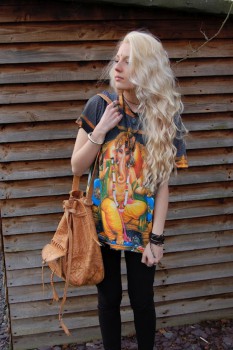 Standing at the veranda of the holy chamber, at a safe angle from the deity, temple officers shooed people off- their irascible faces reminding one of ticket inspectors frowning at loud youngsters on family trains- into another unruly current of devotees putting coins into the close lidded and narrow lipped temple coffers. The temple was evidently vigilant in collecting holy wages.
There was something in the air of the temple that distracted silent thoughts. Its militaristic stride sounded and echoed in the atmosphere. Spaces were compartmentalised and sequestered. There were inclined platforms leading ‘to god’ and verandas of disarray that led to ones ‘away from god’. There were paths around god too. There were feverish diligent paths for money transactions- tidy kits of offering bought from the street vendor, carried by the devotee, ferried to god, gathered by the temple. Time arithmetically paced up and down with flocking devotees and dispersing devotees, in and out of the holy room of god. There was organisation all around.
Worship sounded as strategic as human economy. That is no accident.
Religion is a game changer. It creates different experiences. It brought routine and coherence into early human settlements. It moulded country politics like an overseeing lord. It inspired people to explore science; it clogged the same in some societies. It unified people under vague broad umbrella categories when nations were forged out of nation states, it debilitated tiny umbrella beliefs. It dictated laws and curtailed efflux of money; it expanded its reach and directed inflow of the same. It fed majoritarian strength; it drew minority niches. It changed lifestyles; it boiled propaganda. 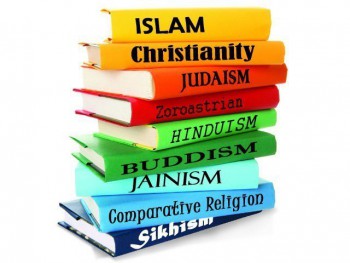 Religion is a collective experience that may be crudely mined out of internal experience. It dilutes the lofty ruddy gates and poster-infected walls between the individual mind and the societal mind. Being an emotion both intimate and overt at once, religiosity becomes an effective human controller. It rules conscience as it influences society. It becomes the routinely morning breeze and nightly gale of a community. Any society routine should have some structure that collects- the temples, mosques, churches. They need to be looked after; money is essential. Transactions begin within the walls, and spread around as meshes of economies sprout around them. From the nook by the roadside to the gate to the structure, strategy wheels money in a pram. It becomes an automatic path.
As dull as it sounds, religion is a routinely experience guided by human minds. Yet, the variety in its life rests with the fact that it is extremely affected by human minds’ levers- Organised Belief or Personal Belief? Poisonous Politics or Nonchalant Spirituality? Rhetoric or Blandness? Dubious History or Penetrative Propaganda? 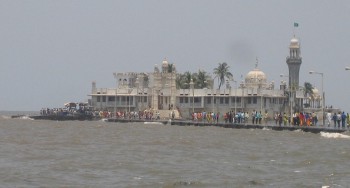 I catch a glimpse of Haji Ali Dargah – a beautiful sepulchre standing at the end of a long street, sea wading in as little waves, through an extensive beach of garbage. There was imminent putrefaction in the air. It made one cautious. Men spitted on the ochre ground as they came out like pale white apparitions out of the yellowing white dargah, itself an unfortunate apparition trapped in filth’s hell. A screeching voice shouted “Giraa, giraa, dhosou giraa!” (Two hundred rupees has been dropped!). A vendor boy sat on a tiptoeing wooden chair, its legs on the tenuous edge of the concrete platform (on which the entire dargah locality stood, raised from the sea level) below which waves broke and crept as foam into the garbage beach. He mechanically pointed to his rectangular glass box of rings, as I caught his glinting eyes slyly mocking me, a star struck tourist, who was only too anxious to find the elusive ‘fallen two hundred’. I bought a ring- so alarming was his strategy. 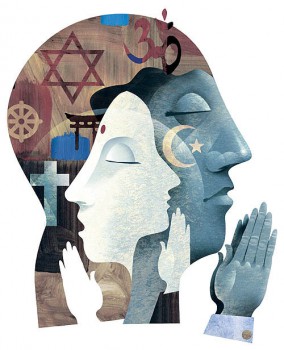 As I walked back to the roadside where clever vendors stood guard to the path to the tomb, I saw a female hand with a plethora of holy threads around it- each creeping over one another in erratic colourful meshes. I couldn’t ask her to relate the story of her thread-struck hand. Yet, I guessed it would be the same drab self repeating turn of events- the planet misplacing, the long queues, and the didactic astrologer. Is religion so predictable? The answer came in godly form.
A human sat squatting by the roadside, next to a rocky puddle, with his immaculate dusky forehead striped in long creases, eyes closed in some rapt thought. He opened his owl-eyes and looked right into my bespectacled eyes as I flurried across him, too wonderstruck to drop the gaze. Hypnosis or Mind Reading Godliness? I wasn’t so sure.